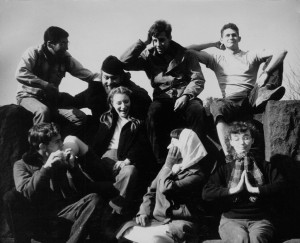 Fully Awake. a documentary film which explores the history of Black Mountain College, will be shown on Tuesday, September 16th, at 7:30 PM in the auditorium (third floor) of Holy Comforter Episcopal Church. This showing will be the monthly program for Alamance Artisans Guild and the public is invited. This film has further local connections as it was directed by Neely House and Cathryn Davis Zommer and was produced, at least partially at Elon. Cathryn is the sister of Courtney Davis Shoemaker, Elon’s current Espicopal Chaplain. The film won a Special Jury Award at the Rome International Film Festival 2007 and was selected for Berkshire International Film Festival. Please join us to see this incredible film.

“Hidden in the mountains of Western North Carolina, Black Mountain College (1933 – 1957) was an influential experiment in education that inspired and shaped twentieth century American art. FULLY AWAKE: BLACK MOUNTAIN COLLEGE is a documentary film that explores the college’s progressive pedagogy and radical approach to arts education. FULLY AWAKE explores how the confluence of this diverse community came together to create a unique educational model. Through narration, archive photography, and interviews with students, teachers, historians, and current artists, FULLY AWAKE investigates the development of this very special place; the site of Buckminster Fuller’s first geodesic dome, John Cage’s first ‘happening’, and the Black Mountain Review, and how its collaborative curriculum inspired innovations that would change the very definition of “art.” Fullyawake.org
“WHY REMEMBER BLACK MOUNTAIN COLLEGE?
• Teachers and students included: